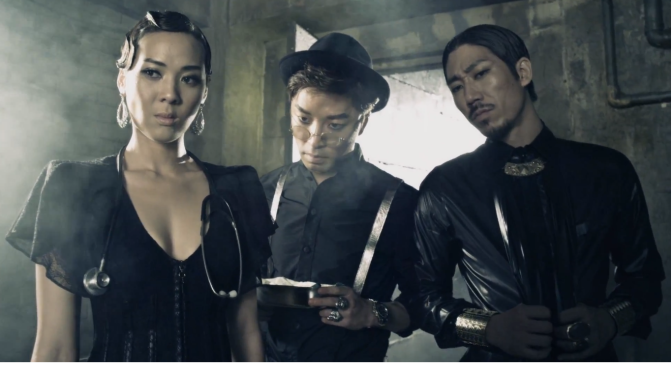 MFBTY (My Fans [Are] Better Than Yours) is a Korean hip-hop group consisting of Korean hip-hop legend, Drunken Tiger/Tiger JK, YoonMiRae, and Bizzy. They debuted in 2013, and have one official full length album and one mini album. However, the group was absorbed into the Drunken Tiger name in August 2013, and have one album under this name. In December 2014, they were again rebranded as YoonMiRae Ft. Tiger JK & Bizzy. However, the trio will go by the MFBTY name going forward.

MFBTY started as a joke mentioned by Drunken Tiger/Tiger JK on his Twitter account. In 2011, he revealed that the pseudonym stood for “My Fans (are) Better Than Yours.” JK made a reference that his fans lived in a special type of blissful Wonderland, a nod to the book, Alice In Wonderland.  The joke strangely became popular with fans of other pop group fanbases, which spurred a number of cult following Twitter accounts. Up until this time, the acts had recorded multiple songs for solo albums that they never released. However, they had performed as a trio for six years. They realized that they felt most comfortable performing as a group, so decided to rebrand themselves as a 3-person project group known as MFBTY.

MFBTY does not mean that each artist’s solo careers are finished. Since it is considered a project group, the members still plan to release solo albums. Each has different styles of music that do not fit the MFBTY style (alternative pop/hip-hop), and plan to use their solos to convey their individual  sounds. However, due to their bond, this also means they can reassemble as MFBTY whenever they want to make “Feel Ghood Music.”