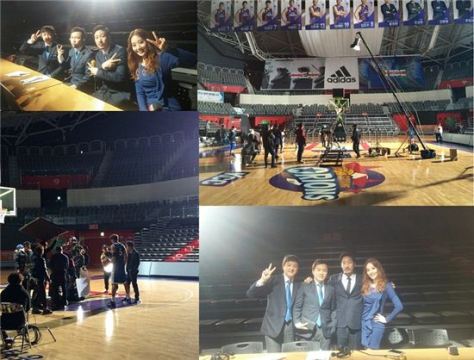 Korean Basketball fans have something to be excited about. Tiger JK will be releasing “Dunk Funk,” a track with a basketball theme that will get the hearts of fans racing.

MBC Sports Plus has linked up with Tiger JK to provide a special end-of-year present to the 2015-2016 Pro-Basketball fans – a unique collaboration between Hip Hop and Basketball.

Tiger JK was infatuated with the announcer badge worn on the announcer’s uniforms and took no time to put it on himself during the MV shoot. It was reported that his funny and often quirky acts made the environment very relaxed and humorous.

“Dunk Funk,” which will be released via MBC Sports Plus, will portray the sport’s unique competitiveness and sportsmanship over hip-hop beats. It is anticipated that with this track playing on the fields, the fans will enjoy basketball even more on a new level.