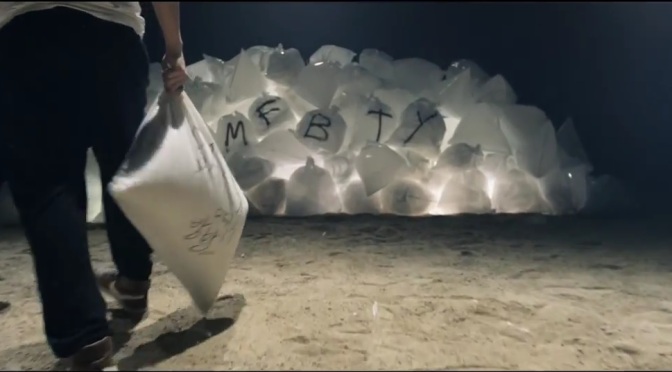 So we’re off! MFBTY has officially released the Wondaland album, and they didn’t disappoint. While the album is considered “underground pop,” loyal hip-hop fans of the trio will not be disappointed. Before we get into the album, a reminder of the (1 of 3) debut single: “Bang Diggy Bang Bang.”

That hook just gets you, huh? As expected, the song took off, and the entire album topped charts within hours. It was so popular, that it took over 17/20 spots on Daum.net music charts.

As for the video, there have been many compliments regarding the playful vibe and MFBTY’s dance skills (Don’t worry, hip-hop OGs, it was only a few moves). The fast pace and array of colors in “Bang Diggy Bang Bang,” makes it easy to miss underlying messages. Luckily, our keen eyes and MFBTY expertise were able to catch them. Here’s what you missed:

1)There’s A Meaning Behind The Pillow Fights

When MFBTY was still a joke between Tiger and fans, they created “wonderland,” which was a figurative place where JK and fans could say and do anything, almost like a child getting lost in a mysterious world. Tiger would playfully say, “Let’s pillow fight,” if he sensed someone would disagree with something he said. It soon became a daily saying for him, and fans would reply back, “Pillow fight!” In the beginning of the video, we see JK walking with a pillow in his hand (properly marked “Bang Diggy Bang Bang”) and his destination is a pile of MFBTY pillows. Given the name came from MFBTY fans before there was an MFBTY, it was only appropriate that the debut video started with this shout out to “wonderland.”

The “LOST” t-shirt appears subtly repeatedly throughout the video. While meaningless on the surface, this is another homage to the original “wonderland,” where fans could get “lost” in the madness.

We saw BTS Rap Monster already kill it on MFBTY’s “Bucku Bucku/Shy Shy,” and the last line of his verse was what really surprised people: “Even my poop smells like jasmine tea.” The video for “Shy Shy,” was shot the same day as “Bang Diggy Bang Bang,” and Rap Mon wanted to reiterate his poop smell was so unbelievably good, it would literally “blow up toilets.” Now we know his jasmine poops are green in gaseous form.

4) Duckie Dale, The Bangles, and Indiana Jones Made Cameos

If you just understood that, you are an 80’s geek who related to this vid a little too well. There were an unbelievable amount of nerdy awesome 80’s moments thrown in, but the one that stood out to us was this shot. Bizzy’s pompadour hairstyle is reminiscent of famous 80’s icon, Duckie Dale from the film Pretty In Pink. Tasha’s head band takes us back to The Bangles “Walk Like An Egyptian” music video, which helped popularize Egyptian inspired fashion in that time. Leave it to Tiger to exaggerate the turban look and go borderline Indiana Jones (We debated if it was more Douglass Quaid from Total Recall, but that movie just made it out of the 80’s). Their stylist, Little E of electronic band, EE, did a heck of a job taking us back through time.

Tiger has a background as a martial art teacher, and the one person he always aspired to be was Bruce Lee. Tiger has even emulated Bruce’s hair from time to time, and never scoffed at a comparison of him and his idol.

Bizzy drops a line referring to luck on his lefty while holding up his hand in the music video. Bizzy’s nickname is “Lucky Lefty,” because he is left handed.

That haunting hook is not a shout out to Hawaii. The code “808” actually has two meanings. The first referring to the  Roland TR-808 drum machine, which may have created some of the hard sounds in the song. “808” is also a police code for disturbing the peace with the sound of bass. Thus, the hook really means, “Here comes the bass that’s going to rock the neighborhood.”

The full length “Wondaland” album is now available in stores and on Itunes.