It is 6:55pm, five minutes before the show starts. Another Drunken Camper and I are in the front row getting wet from the rain. However, that doesn’t stop the crowd from going wild with anticipation. The show finally starts, and it starts off right with Dumbfounded, a Korean rapper who mostly known for his battling skills on Grind Time TV. He had a real laid back sound that reminded me of Lupe Fiasco (Be sure to be on the lookout for Dumb’s album coming soon. Do your research!).

After Dumbfounded, Bizzy & Palo hype up the crowd before JK’s appearance. When JK comes out, the crowd loses it (You could probably here his name being echoed in Seoul). He starts with “Do You Know Hip-Hop,” one of my personal favorites from his Year of the Tiger album. The crowd is reciting line for line with so much energy. I end up getting hit in the head a couple of times by fans who are waving their hands back and forth, and it’s somewhat of an annoyance. However, JK’s performance is so hypnotizing that it doesn’t matter. Next he performs, “Isolated Ones! Left Foot Forward,” followed by “Good Life,” and then “I Want You,” which is mixed in with Dr. Dre’s “Next Episode.” This was my first JK concert, and watching JK’s concerts on YouTube couldn’t even compare to this.

The best part about being in the front row of the pit is getting the chance to see the artist up close and being more personal with them. JK doesn’t mind the personal bond either. After coming down from the stage more than five times, you can sense the joy he feels from his interaction. It’s a thing that some American artists won’t even do at their shows, and the fans appreciate it greatly. 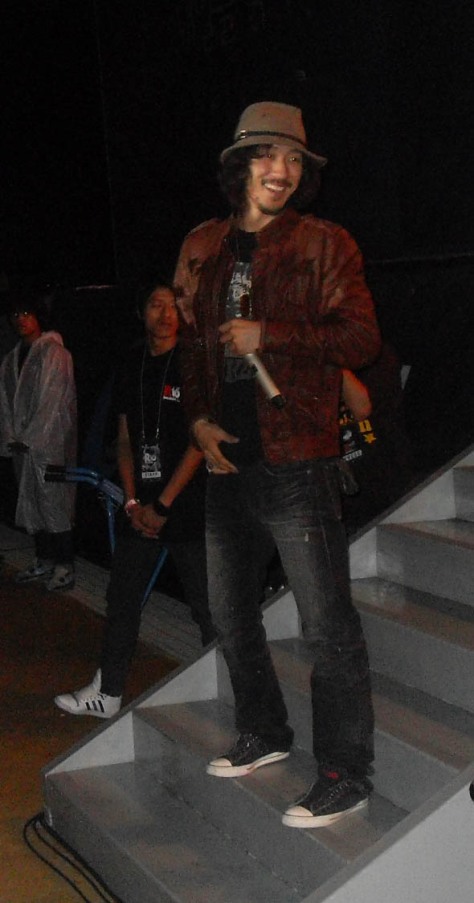 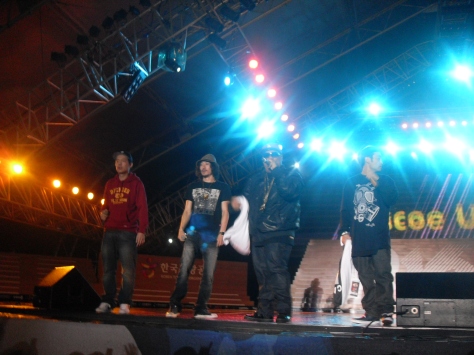 Afterwards, Epik High takes the stage with a splash, throwing water into the crowd, waking me up from the trance I was in after JK’s performance. Epik’s performance sends the crowd on a buzz that is surely felt. Soon after, they introduce Dilated People’s Rakaa. Man… for those who don’t know Rakaa, do your research! This guy is nothing to mess with! Rakaa brings the crowd back to reality with the message to keep supporting Korean hip-hop because Korea has some of the greatest hip-hop artists alive. He was sharing the stage with some of them that night, so he knew it all too well.

Wait, is that beat what I think it is? Where’s my camera?

As “Monster” starts playing, fans beside me lose it. Every one of the perfomers is back on stage doing their own verse on the “Monster,” beat. I try  hard to keep my camera from shaking because the crowd behind me jumping up and down.  My camera battery starts to die, and I start praying it’ll hold out to record this rare moment. Luck was on my side as my camera survived the 6+ minute performance.

While being front row is great, there’s always that crazed girl next to you that won’t stop screaming (you’ll hear her in the video). So El uploaded her footage from backstage. It’s tamer than the video I have, but it doesn’t have any distracting screaming girls.

After the concert, an angel from nowhere gave us the okay to meet the stars. The fellow Camp member I was with in had caught Roscoe’s Vlado sneakers that were thrown into the crowd, and one of the show organizer’s who saw it let us enter to get the shoes autographed. In the midst of this, we were able to meet some of the performers before they left. And despite being such an influential force in the hip-hop world, these guys are some of the most down to Earth emcees I’ve ever met. Seriously, this stuff only happens in dreams!

We ended the night on a high note and our hour and 1/2 bus ride home wasn’t even felt. Despite feeling hungry, tired, and wet from the rain, truly, this was an experience that will never be forgotten.