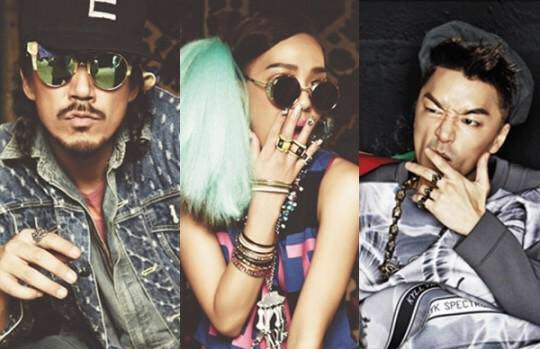 MFBTY previously released a mini album in 2013 called, “Sweet Dream,” followed by “The Cure,” under the Drunken Tiger name, and then a single under Yoon MiRae’s name, “Angel.” All their title singles swept the charts, but they had never released a full length album under the MFBTY name.

This is one of the 3 triple threat singles. It reinterprets the chorus from YoonMiRae’s “Goodbye Sadness, Hello Happiness,” and is complimented by a sweet melody played by Yoo Hee Yeol, a well-known musician and TV host in Korea. Yoo did the arrangements for this song. This originally was not a title song, but they kept redoing it and Hee Yeol instantly loved it. YoonMiRae’s resonating vocals along with Yoo, Tiger, and Bizzy will stimulate the senses.

This song intro was originally supposed to be narrated by Yoo Hee Yeol. Tiger JK asked to do a provocative intro, but they could not include it due to its content. The song has a sexy feeling to it and incorporates an EDM (electronic music festival) sound. This is a genre that MFBTY has never tried.

The fun does not stop in this song. MFBTY pre-released a music video for “Shy Shy,” which features electronic duo EE, BTS’ Rap Monster, and new rapper, Dino-J. This song comes closer to MFBTY’s hip-hop origins, with every person spitting a rhyme parading their confidence. The hook is extremely catchy, and the hard hitting rhymes will leave you shaking.

This is one of the lighter, more fun, songs on the album, and the second “triple threat” single. The song is supposed to evoke getting lost in a disco ball. There is a line in YoonMiRae’s rap where she says, “I only can see my eyes.” The rhythmic beat and stomp will make you feel like you are in a real disco. This became a triple because Yoo Hee Yeol recommended it.

Tiger JK asked Dok2 to help because he knows the current trend really well. There is a funny story behind this track. Dok2’s white Mercedes SUV surprised JK’s neighbors. “The Quiett” also participated in the track and gave a lot of advice

This is one of the triple title track with Windy City’s Kim Ban Jang on the drums. Mirae thought of this song while riding 방방 with her son jordan (방방 seems like a name of an amusement ride). It harkens back to the 80s and features a retro tone music video. MiRae also shows off her cool dance moves. Tiger mentioned that Tasha used to be in an idol like hip-hop/R&B group, so she knew how to dance well. I saw her dancing at home so I secretly asked her to come up with the choreography and made the track. The song leaves an impression with its foreign sound and reminds people of martial arts movies. Amongst the three singles, Yoo Hee Yeol suggested this to be the main one.

Jordan took part in this song including the song writing, performance, and producing. When jordan saw tiger jk working on a music program, he tought it was a video game and started playing with it. When MV director, Lumpens, heard this track by accident, he thought it was JK’s track and asked him to include it on the album so he could work on it. Currently, Jordan doesn’t like the title and keeps asking to change it to, “Dub Step” (a genre he likes). The dreamy and addictive electronic sound lingers around the ear. and Jordan’s voice saying ‘방귀대장 뽀로로(Fart Captain Pororo)” brings a mother-like smile to your face.

This is a track with Beast’s Yong Jun Hyung. MFBTY wanted to do a song where they would break barriers, introducing an idol to the hip-hop community and a seasoned rapper to the pop audience. Yong actually hesitated for 20 days. He reinterpreted the song and did not come off as a stereotypical idol rapper. Tasha’s vocals and fast rhymes stand out. She switches back and forth, intensifying the fun almost like a roller coaster. MFBTY’s skill shined here and Yong JunHyung comes off as a brand new artist.

This track is with legendary rocker, Jeon In Kwon. Tiger JK and Jeon In Kwon continued to work on the track up until the day of the listening event. It was a reggae track with rap, but the rap was taken out per Jeon’s advice. He wanted to remove everything and only have truth, roughness, and loneliness. It is a minimalistic track with vocals, no gimmicks. Jeon’s trademark voice and MFBTY’s voices come together in this calm harmony.

*Bang Diggy Bang Bang is like an onomatopoeia for hopping/jumping as well, similar to like when you are on a trampoline. Jordan enjoys trampolines.

MFBTY (Tiger JK, Yoon Mi Rae and Bizzy) confirmed their album Wondaland, which will be released on March 19th, has 3 title tracks. As a preview, they released a full MV for one of their tracks 부끄부끄 (Bucku Bucku – Shy Shy).

MFBTY’s label Feel Ghood Music uploaded the “Bucku Bucku” MV on their Youtube channel as a teaser, which was wonderful news for patiently waiting fans. “Bucku Bucku” features Korean idol group BTS leader Rap Monster, electronic duo EE, as well as Feel Ghood Music’s rookie, Dino J. The hook of this song is already found to be highly addictive by fans. The artists rap in a black and white background, which accentuates their natural charisma.

Tiger JK and Yoon Mi Rae rapped with their untouchable flows while Bizzy had his on style combined with his signature unique gestures.

BTS’s Rap Monster shined in this track, defying all stereotypes of an “idol rapper.” Within his rap were messages to his haters who try to bring him down.  The message was cleverly delivered with his witty, confident, rhythmical flow confirming his position as one of the heavy contenders for best rapper in the music scene.

EE, with their unique style, complimented the track nicely, while Dino J showed that he meant business with his hard hitting rap.

For now, MFBTY has revealed “Bucku Bucku/Shy Shy” and “BangDiggyBangBang” to be 2/3 of the title tracks. The question remains as to which track they will choose as the final single.

Wondaland is highly anticipated within Korea as well as all around the world. The album will be released on March 19th, 12PM KST via various online music sites. Pre-orders are available now from all major music retailers.

BEAST’s Yong Junhyung is participating in group MFBTY’s (made up of Tiger JK, Yoon Mirae and Bizzy) new album.

After accepting Tiger JK’s request, Yong Junhyung recorded a verse for the MFBTY album. This is the first time the two are working together.

An industry official said, “Tiger JK has been having a huge interest not only in BEAST songs, but also the songs that Yong Junhyung featured in with his rapping. He personally requested for him to collobarte.”

Before Yong Junhyung made a name for himself through composing and song-writing, he was a rapper that featured for other artists. He featured on songs like “Caffeine,” which was a song with Yang Yoseob from the same group, and “A Heart Aching Story” with Wheesung. Apart from this, he has also worked with JYJ, Kim Jaejoong, Baek Jiyoung, Park Shinhye, Eru, Ha Dong Kyun* and Lyn.

MFBTY is releasing a new album after 1 year and 6 months.

This comeback is 1 year and 6 months after the release of the mini album, Drunken Tiger “The Cure,” that was released in 2013.