The MFBTY tour is approaching! Tiger JK, Yoonmirae, and Bizzy will be making stops in Irvine, CA, Chile, and Paraguay. We’ve summed up a mini-guide for fans gearing up.

4:45PM UCI HG 1030, panel with Kurtis Blow (this event is open to the public, no ticket required)

Parking is nearby at the Campus and West Peltason (next to theatre). Available for $10 (do not park at mall across street). 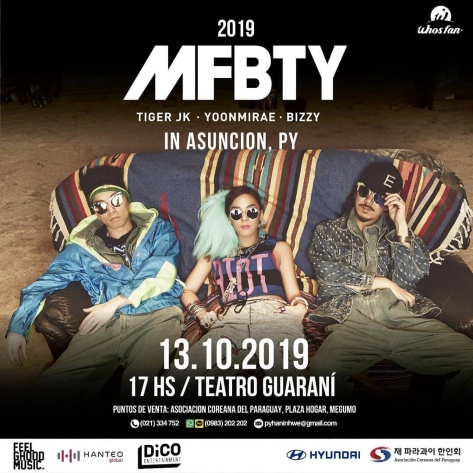 Tickets can only be purchased in person at the Paraguayan Korean Association.

For both the South America stops, there will be photo ops and a VVIP event (details to be announced).

We recommend following @mfbtyespanol for all South America inquiries, Dico Entertainment on Instagram for further information on Chile, and the Paraguayan Korean Association on Instagram for Paraguay updates.

The INTL will be posting about the Irvine California show on @drunkentigerintl Instagram. We’re also holding a ticket giveaway through September 29th.

Leave it to the “Wondaland” artists to drop news of a new mini album unconventionally!

MFBTY members, Tiger JK and Bizzy, have become addicted to their Instagram lives as of late, dropping snippets of a Feel Ghood Music EP that’s coming out TOMORROW 6/27.

The mini album will include all Feel Ghood Music artists, including Drunken Tiger JK, Yoonmirae, Bizzy, Junoflo, and Ann One.

We’ve asked JK to repost his IG live previews, but he’s keeping the snippets ever elusive for those not watching his lives already!

We recommend fans hit the follow button on IG and put boss on alert if they want to hear the album before anyone else!

6:06AM KST UPDATE: After TigerJK went live, more details have been released. The album will drop at 6PM KST. FGM has NOT finished recording it (LOL). Another song title, 토끼 (“MADHATTER),” was revealed. It is a collab between Arden Cho and MFBTY (Drunken Tiger JK, Yoonmirae, and Bizzy). Another song features MRSHLL (Marshall Bang), an artist that Feel Ghood Music was seen hanging out with at SXSW.

In the March issue of Elle Bride Korea, 13 couples, including Yoon MiRae and Tiger JK, shared their romantic love stories as well as did a photoshoot just in time for the 130th anniversary of Tiffany Jewelry’s Setting Ring.

When asked about why they did not hold a formal wedding ceremony (they did a small, laid back one with friends and family), they answered, “Rather than throwing a lavish event mainly focused on pleasing other people’s eyes, we put importance in living with laughter, with each other.”Their interpretation showed the true meaning of marriage.

Although they’ve been married for more than 9 years (together for 13!), Tiger JK & YoonMiRae act just like newlyweds – sharing the happy, sad, and tough times with each other and growing with one another.

Other couples such as Sean & Jung Hye Young, and Steve J & Yoni P, will be featured in the March issue of Elle Bride to celebrate the 130th anniversary of the Tiffany Setting Ring.

The Hanhwa Eagles’ new cheer song, “Eagling/Fly Like An Eagle,” by MFBTY was exciting news for most, but questions arose when The HanHwa company brainstormed the new anthem.

Hip Hop? In a cheering song? Is that possible? After MFBTY released their track, no questions remained. “Eagling,” proved MFBTY’s musical abilities once again and reaffirmed them as some of Korea’s top musicians. Most importantly, it helped reaffirm The Hanhwa Eagles’ position within the National Baseball League.

With new recruit, Esmil Rogers’ spectacular defense, and now “Eagling” blaring on the speakers, the dedicated Hanhwa Eagles fans are flocking to the stadium and their TV screens.

“Eagling” was inspired by the comments left on the fan pages and then embedded into MFBTY’s lyrics. With The Eagles recent brilliant performance and “Eagling” cheer song, it certainly looks positive for the team.

Ever since its release, the fans had one request: make the song purchasable. The track, “Eagling” was such high quality that many requested it to be released as a single. However, due to the digital music market technicalities, the HanWha company were not able to release the track for purchase at first.

Due to the ever increasing popular demand, Hanhwa Eagles and MFBTY mutually agreed to release the song, with all proceeds going to charitable organizations or other donations.

“Eagling” full version was released on August 13, 2015. It can be downloaded via Itunes & Melon.

January 21st, 2013 marks the day MFBTY debuted officially as a group. As a gift, DT INTL team asked fans to send their own 15-sec clip clip congratulating them. The above video is a compilation of some of their most diehard fans, aka their angels. From us to them, Happy Birthday!

We know there are more people out there who would’ve loved to be part of this, and we apologize we could not include everyone. If you would like to participate in future projects, email us drunkencamp@gmail.com.

When we turned in last night, we already saw YoonMiRae’s “Angel” racing into the Top 5 on most of Korea’s music download sites. We woke up a few hours later, and she was sitting at #1 on four major charts: Soribada, Mnet, Olleh, and Genie. The queen sits on the throne again, with her king and prince right beside her.

For US fans: “Angel” can be downloaded via Itunes for .99 cents. Ambitious fans can buy the single and album art for $9.99.

December 8th, 2014 – After a year’s hiatus, MFBTY came back debuting under YoonMiRae’s name, now known as YoonMiRae ft. Tiger JK and Bizzy. (Update) The lyrics send a message of hope, as it chronicles the tribulations the three endured over the past year. It sends people the message that love can be found in almost anything–from a complete stranger to a a close friend. Thus, the inspiration for the end images of the trio with both personal and work (FGM) family.

The three members have been boxing as a family hobby for the past 6 months, and they are not afraid to show it off here. Yoon MiRae also busts out some of her choreographed danced moves that we haven’t seen in years (and still has it down). Warning to all the ladies though, you may need to sit down before you watch this as there are some good looking men parading around in this video.

And with translated lyrics:

Thanks to FGM’s resident MV director, Lumpens, we have an idea what happened the day of the “ANGEL” MV shoot. Our crew seems to have some dance moves we didn’t know about. Okay, we knew Tasha busted moves in her olden Tashannie days, but 15 years later she still got it!

And remember during the TVN “Welcome To The Jungle” special when everyone said Tiger had some *interesting* dance moves? Well, now you can judge for yourself.

Singer and rapper, YoonMiRae, will return to the music scene with song, “Angel,” on December 8th, 2014.

Yoon Mi Rae’s record label, Feel Ghood Music, revealed the MV Teaser via various online music sites on the 3rd, with Yoon Mi Rae writing ‘Who’s your angel?’ along with a link to the teaser on her social media account.

Feel Ghood Music stated that this is YoonMirae’s first solo track after 2011 hit single “Get It In,” and it is a song well fitted for December, sending messages of thanks to people that she loves.

They continued on to say that, “Angel,” is themed around the fact that everything and anyone can become an angel, whether it be your family, love, movie, even a stranger’s smile that spreads wings of hope to those that are in need. They hope that this song becomes an angel to those that are going through tough times right now.

Feel Ghood Music indicated that they chose to release this single first (which was originally planned to be released in 2015) since “Angel” has a special message fitting for this time of the year.

YoonMiRae confirmed that her previous moniker, “T” will no longer be used moving forward.

Embracing a new start with Feel Ghood Music, YoonMiRae plans to put her real name forward, and release music that are true to her soul to connect with her fans.

With her well rounded capabilities in all genres varying from ballad to rap, much anticipation is building for YoonMiRae and what kind of music she will bring to the scene. 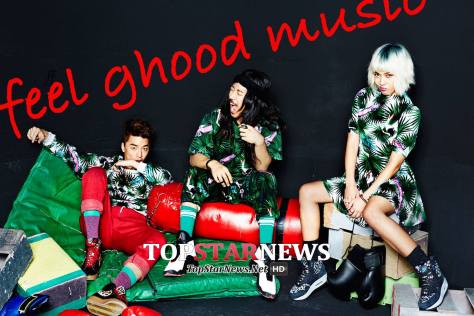 On November 26th, it was announced that Feel Ghood Music (FGM) will lead the industry by working with various genres and reaching out to the public. They have also stated that they will not limit themselves by working on music, but expand their horizons and work in other areas such as cultural awareness.

Feel Ghood Music plans to collaborate with other talented personnel such as musicians, DJs, and Art and Visual Directors, to breathe a new life into the whole entertainment industry. The aim is to stand out as a new type of music label.

As a label, Tiger JK, Yoon Mi Rae & Bizzy formed a supergroup MFBTY (My Fans better Than Yours) back in January 2013 and swept the number 1 spots in the Korean Music Charts as well as being noticed by Billboard US magazine gathering international attention with their hit single “Sweet Dream.”

Further, MFBTY held their debut stage at MIDEM – the world’s biggest music market held in France every year to a overwhelmingly positive response. MIDEM praised MFBTY stating that they were the only Asian artists to be able to hype up the crowd whilst they were on the stage.

Tiger JK & Yoon Mi Rae, who are well known veterans in the industry, have proven their territory in their music career.

American magazine, XXL, mentioned Tiger JK in their article “Top 15 Korean Hip Hop Artists You Must Know,” while Yoon Mi Rae was the only female artist to be mentioned in the same article.

Yoon Mi Rae also proved her worth on an international level when she was named in US MTV Iggy’s “World’s Top 12 Female Rappers” list.

Tiger JK announced last month that there is a special project in the works, but would not say if it would be a full MFBTY release, a solo artist release, or something from their new artist. The past MFBTY release was done under the Drunken Tiger name, and while we know our trio will have definite involvement on the new release, details on the scope of that are to be determined. The prospective MFBTY project is scheduled for December 2014.

UPDATE: Feel Ghood Music announced that the project will be released December 8th.